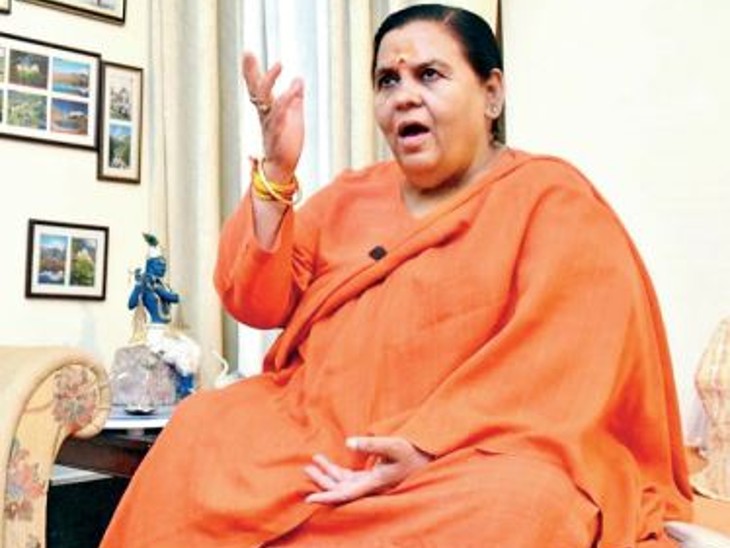 Mohan Bhagwat is God to me.

Uma Bharti. Age 63 years. Dress, saffron. Cleanliness is the same for which it is recognized. These days they are on the streets of MP. Against the prohibition of alcohol. Wants some changes in the new liquor policy. In protest, sometimes throwing stones at liquor shops and sometimes cow dung. Bhaskar questioned Uma from prohibition of liquor to contesting elections in 2024 and even Yogi-Shivraj. He spoke freely. Read this interview…

I am against liquor ban, not Shivraj… I’m afraid MP will be swept away by alcohol

Why are you so aggressive these days? Do you want to give any message to Shivraj?
Four or five things about the new liquor policy are very wrong. For example, drinking alcohol in the premises and opening the premises in the laborer’s settlement. With the new policy, foreign and foreign and indigenous were sold in the country. Due to this the number of liquor shops directly reached 18 thousand. I was talking to Shivraj ji about this for a year and a half, but I did not tell anyone. Then I slowly started to open up. Right now it seems to me that MP will be drowned in alcohol.

Meaning your aggression doesn’t have political meaning?
Alcohol is a social topic for me. not political. Rest I consider Shivraj ji to be a better person than me. I am not against them, I am against alcohol.

When you yourself were the CM, what did you do on prohibition?
I broke the back of the mafia. Not demanding a complete ban from Shivraj too, but what is the problem in implementing the revised policy. Our policy should be how least people drink alcohol. We (MP government) have adopted a policy that how more and more people should drink alcohol. I cannot understand why Shivraj is not understanding from my words.

Do you think that extreme religiosity or extreme nationalism creates voices of protest in the society?
No. What is extremism? It is extremism that you wish that PoK will be ours. You should be liberal in the matter of religion. But when the interests and harm of the nation are seen, then they can take full vigor. The party took the right action against Nupur Sharma. Because his statement was against the policy of the party.

BJP’s policy is not to ridicule other religions. Nupur is domineering. It’s a lioness. But hanging his effigy, trampled his photo with shoes. Owaisi should have condemned immediately. All Muslim leaders should have condemned that this is against the tehzeeb of Islam. From these actions again such slogans are raised that from where Afzal will come out, he will enter that house and kill him.

Where is Congress in Panchayat-Body elections?
Congress is over in MP. He had a diamond. Jyotiraditya. Today Congress does not even have a campaigner. Kamal Nath is not able to work hard. Wherever Digvijay goes, Congress votes get reduced.

We don’t comment on what Bhagwatji said, Sangh Pramukh is our God

The RSS chief said that finding a temple in every mosque is wrong. do you agree?

The core elements of Islam are the concepts of Jihad and Kafir. For all these reasons, the invaders destroyed many temples. But in 1991, when the bill came for Ayodhya, Mathura and Kashi, then the Ayodhya matter was in the court. It was in the bill that except Ayodhya, the rest should be kept in the status of 1947. So that thing is not applicable to Mathura, Kashi. I was the party’s first spokesperson on that bill and I had said in 1991 itself that along with Ayodhya, also add Kashi-Mathura to it. Because the mosques in Mathura-Kashi and Ayodhya are ordinary mosques of Muslims. But Hindus have the same places of faith as Mecca and Medina are for Muslims. Therefore, if they are not considered as normal places, then there will be peace. Otherwise they will raise their heads again someday. And see what is happening. We do not comment on what Mohan Bhagwat ji said. We see the Sangh Pramukh in the place of God.

Do you want to return to politics from MP in 2023?

My politics is going on even without becoming an MP-MLA. I will never leave politics. I will definitely contest 2024 elections.

Want to contest 2024 election from MP or from UP?

You should ask this question to BJP whether you will contest Uma Bharti in 2024 and then from where?

How do OBCs view reservation?

I am in favor of reservation. Even in my mind there should be reservation in private sector like government jobs.

Is the pain of being removed from the post of CM still there?

I was not fired, rather I resigned. Never even wanted to become CM again. My objection was that the leader of the legislature party should be chosen only from the meeting of the legislators and not from Delhi. There have always been voices of protest in BJP.

Have these voices become weak now?

What is it that the kind of political approach that Modi took, there are all those things in which the opponents used to raise their heads. Modiji has been a part of the same think tank in which people like Yashwant Singha, Arun Shourie used to sit. I was very young, but used to attend meetings. Now Modiji is implementing all the same things. They are engaged in empowering the society. God bless he remains PM for years.

There is more news…

Oil companies have reduced the prices of LPG cylinders on the first of the month. Today, on Friday, July 1, the commercial gas...
Read more
National

Taking the responsibility of handling the situation of tension in Udaipur city, new IG Praful Kumar in the range took charge on Friday...
Read more
National

Janat News: The current situation in the country has become a cause for fear: Amartya Sen

Share:During an event in Kolkata, the Nobel laureate economist said that the Indian judiciary often ignores the dangers of fragmentation, which is intimidating. ...
Read more
National

Janat News: After Kanhaiyalal’s neck, there is a threat or celebration: Many fundamentalists arrested

Oil companies have reduced the prices of LPG cylinders on the first of the month. Today, on Friday, July 1, the commercial gas...
Read more

Taking the responsibility of handling the situation of tension in Udaipur city, new IG Praful Kumar in the range took charge on Friday...
Read more

Janat News: The current situation in the country has become a cause for fear: Amartya Sen

Share:During an event in Kolkata, the Nobel laureate economist said that the Indian judiciary often ignores the dangers of fragmentation, which is intimidating. ...
Read more

Janat News: After Kanhaiyalal’s neck, there is a threat or celebration: Many fundamentalists arrested

The action has come after several people justifying the killing of Taylor Kanhaiyalal by extremists on June 28, 2022 in Udaipur, Rajasthan. Some...
Read more
Load more