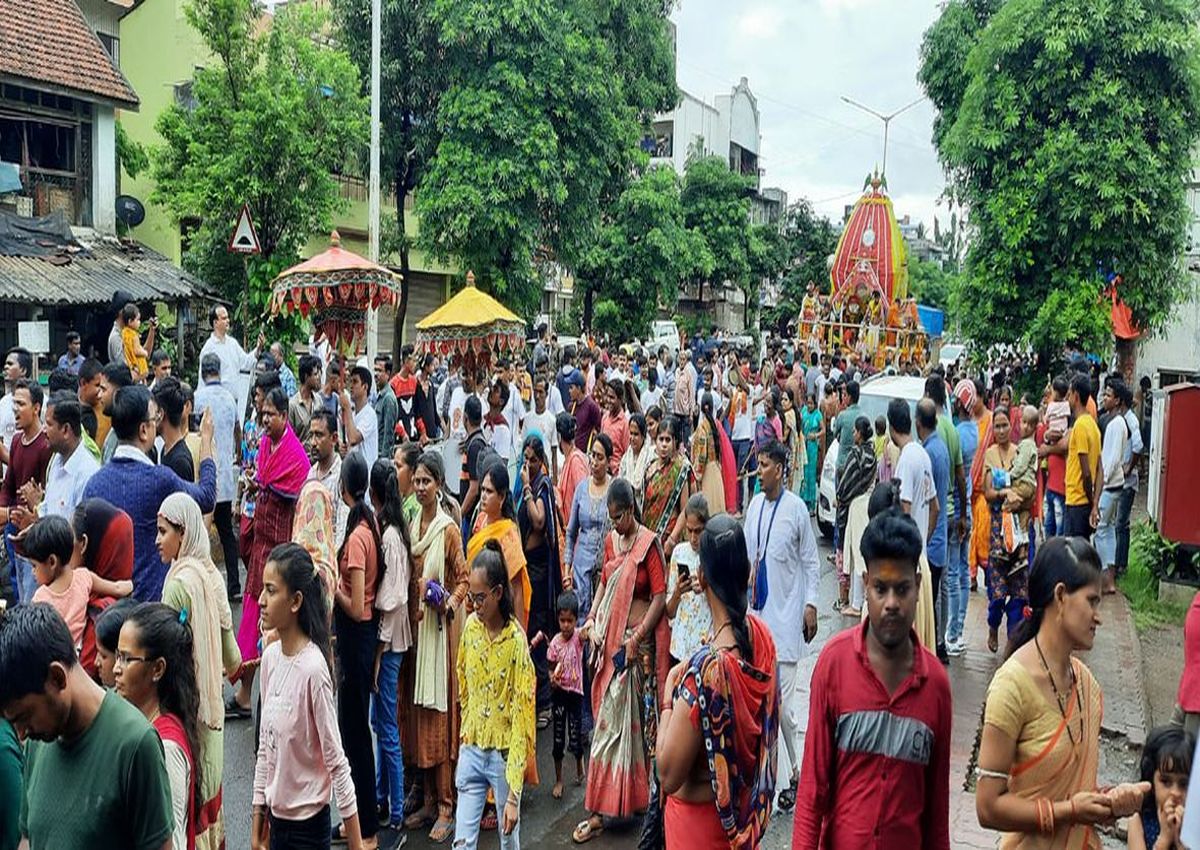 Lord Jagannath did city tour, welcomed from place to place

Silvassa. Devotees danced and rejoiced to the tune of drums and drums in the rain, there was a queue of devotees to pull the chariot and all the men and women kept showering flowers. On Friday, a huge crowd of devotees gathered in the city to worship the Lord riding on the chariot.
People eager to see Lord Jagannath, who came out for a city tour in the morning, gathered on the streets. During the journey, the elder brother Balarama and sister Subhadra were also seated along with the Lord in the chariot. On the way, there was an influx of devotees from place to place to see the Lord and pull the chariot. The Rath Yatra, which took place two years after the Corona period, refreshed the faith and faith of the people. Before the Rath Yatra, in the Jalaram temple, the pundits performed many rituals like Surya Puja, Panchdev Puja and Havan, Pahandi Vidhi, Chhera Panhra etc. After worship and aarti, God in new clothes sat in a decorated chariot to give darshan to the devotees. There was a fair of people as soon as the chariots left from the Jalaram temple. A large number of merchants and businessmen also gathered to pull the chariot at Kilavani Naka. Here the crowd of people was seen on the roadside, roof of houses, verandahs and markets. From Kilvani Naka, Rath reached Gayatri Temple via Jhanda Chowk, Amli four way, where the program of worship of God, Aarti, Prasad was kept by law. After worshiping the Lord reached the Amli fountain, where residents of Sai Dham, Basera, Sai Srishti, Balaji Township, Yogi Vihar, Tirupati Residency and Dayat Phaliya offered prayers to the deity. The Lord stopped for a short pause near Jama Masjid from Amli fountain via Vapi Road, where everyone prayed to the Lord for communal unity, harmony and brotherhood. During the journey, refreshments and snacks were organized from place to place. In the evening, the chariot of God reached Gulmohar via Police Station, Naroli Char Rasta, the main Vihar, where worship was kept for darshan after aarti. Lord will stay in Gulmohar for 9 days.

Janat News The Kremlin spokeswoman for the Russian presidential palace said during a press conference that the Ukrainian delegation had gone off the radar...
Read more
Load more